An early red card for Ben Garrity proved costly for Warrington Town as they surrendered top spot in the table with a 3-2 home defeat to Stafford Rangers.

The young midfielder picked up two bookings inside the first 14 minutes and the relegation threatened visitors made the Yellows pay, coming back from a goal down to secure a vital three points.

Central defender and captain Luke Jones scored twice either side of a tidy finish from Theo Bailey-Jones as Stafford responded to Bohan Dixon’s headed opener and despite Marcus Cusani’s late strike giving the Yellows hope, the visitors held on.

Having had their lead at the top of the EVO-STIK League Premier Division cut to one point thanks to Farsley Celtic’s win in their game in hand in midweek, it was a costly slip as the Yorkshiremen went two points clear.

Connor McCarthy started up front in place of the injured Tony Gray and he got inside the box after three minutes, his pull back cleared.

There wasn’t much else in the game until the ninth minute, when Garrity picked up his first yellow card for simulation after going down under a challenge in the box.

Worse was to follow as he then received a second yellow just five minutes later for a foul on Andrew Haworth in midfield.

That left Warrington shellshocked for a spell, though Stafford didn’t make a wobbly five minutes pay, as both Joe Cuff and Haworth spurned chances.

Despite the man disadvantage, Warrington would take the lead on 21 minutes, Shaun Beeley winning a free-kick down the right hand side and from it, Dylan Vassallo’s whipped in delivery was knocked by Mark Roberts for Dixon to head past the ‘keeper.

As the first half wore on, Stafford started to get a grip of the game and after Bailey-Jones had one saved and Jake Charles had a shot blocked, they equalised.

The Yellows failed to clear from a corner and it fell for captain Jones who hit a snapshot that went through Tony McMillan in the final minute of the first half.

That was a blow for Warrington’s hopes and although Dixon curled a free-kick on target in the early stages of the second half, they struggled with 10 men.

Stafford took the lead shortly before the hour mark, a long throw allowed to bounce in the box and Bailey-Jones got to it first to hook the ball nicely beyond McMillan.

Three minutes they had a two goal cushion, Haworth fizzing in a corner that was met by the head of Jones for his second.

The ground was stunned and the visitors could have had a fourth on 66 minutes when Bailey-Jones steered one just over the bar from a left wing cross.

The introduction of Marcus Cusani, on his home debut, livened up the Yellows, but they struggled to create any clear cut chances.

That was until the 86th minute when Vassallo’s cross ricocheted in to the path of Cusani who lashed home first time to give them hope.

A frantic final few minutes followed but Stafford held on, the closest Warrington coming to an equaliser was when Josh Amis’ header was held by the relatively untroubled Adam Siviter in the Rangers goal.

Warrington are at home against next Saturday, against Whitby Town. 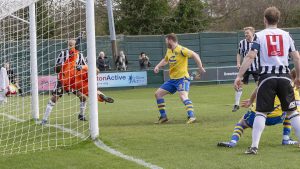 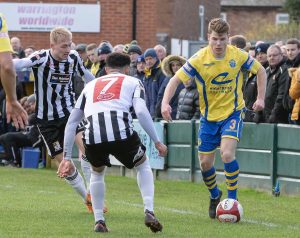