FC UNITED avenged their FA Cup defeat to Warrington Town with a 1-0 win at Cantilever Park.

Jordan Buckley’s header on his debut after signing from Irlam was enough to separate the two sides and send the Yellows to their first defeat since the opening day of the season.

Although Warrington created chances, particularly in the first half, they couldn’t find the break through and slip out of the play-off places in the BetVictor Northern Premier.

Much like Saturday’s FA Cup clash, it was an engrossing contest from the get go with both sides happy to commit men forward.

It was the visitors who started brightest though, a pattern that would continue for much of the match, a low cross by Aaron Morris sliced in to his own keeper’s hands by David Raven.

Having made a number of signings since the cup tie, FC United handed a debut to Jordan Buckley and loan signing from Derby Alex Babos, as well as starting with highly-rated Alex Curran making his second appearance for the club on loan from Stockport.

The Yellows’ first chance came on six minutes, Scott Sephton almost in disbelief in the space he found himself on the right having beaten the offside trap, he drove in to the box and had his low shot blocked by the legs of Patrick Wharton.

Moments later, Ben Garrity found space on the opposite side, the left flank, cutting in on to his right foot and forcing a strong one-handed save from Wharton.

Warrington putting on the pressure suited FC though, as their front four looked lively on the counter attack. Tunde Owolabi, a menace on Saturday, was scythed down on the right touchline for the first yellow card of the game to Dave Raven, while Babos was showing plenty of pace on his first outing.

It was a cross from the left that created FC’s best chance, an excellent delivery from Adam Dodd headed wide by Buckley with Tony McMillan beaten.

Owolabi twice found space on the counter attack, twice trying to take it round McMillan and he succeeded on one occasion, only to find the angle too narrow for him to steer the ball in to the back of the net.

After Curran had twice hit over, Owolabi forced a comfortable stop from McMillan before the Yellows had their next chance, Sephton’s header forcing a save out of Wharton at full stretch.

The Yellows were dealt a blow shortly before half time when Louis Barnes pulled up while in possession and was forced off, with the sides going in goalless at the break.

As with Saturday, the second half was always going to struggle to live up to the first, and it had a fragmented start with both sides having players down for treatment in the first five minutes, Vassallo being one when he went down having got goal side of the defenders in the box.

The deadlock was broken when FC United forced their second corner of the game, Curran swung it in and Buckley rose unmarked to head in to the top corner.

That triggered a period of dominance for the visitors where they really had their tails up, forcing multiple corners and threatening to bury the game there and then.

Yellows rode the storm but never really managed to create one of their own, the closest they came was when Vassallo’s corner was headed on by Garrity and Josh Amis, but Dave Raven couldn’t get over it and headed over the bar.

Gray forced a save out of Wharton at his near post after twisting and turning in the box, and as the game entered six minutes of stoppage time, a scuffed corner turned in to a chance for Amis but he was crowded out.

FC United saw the game out to earn their first away win of the season. 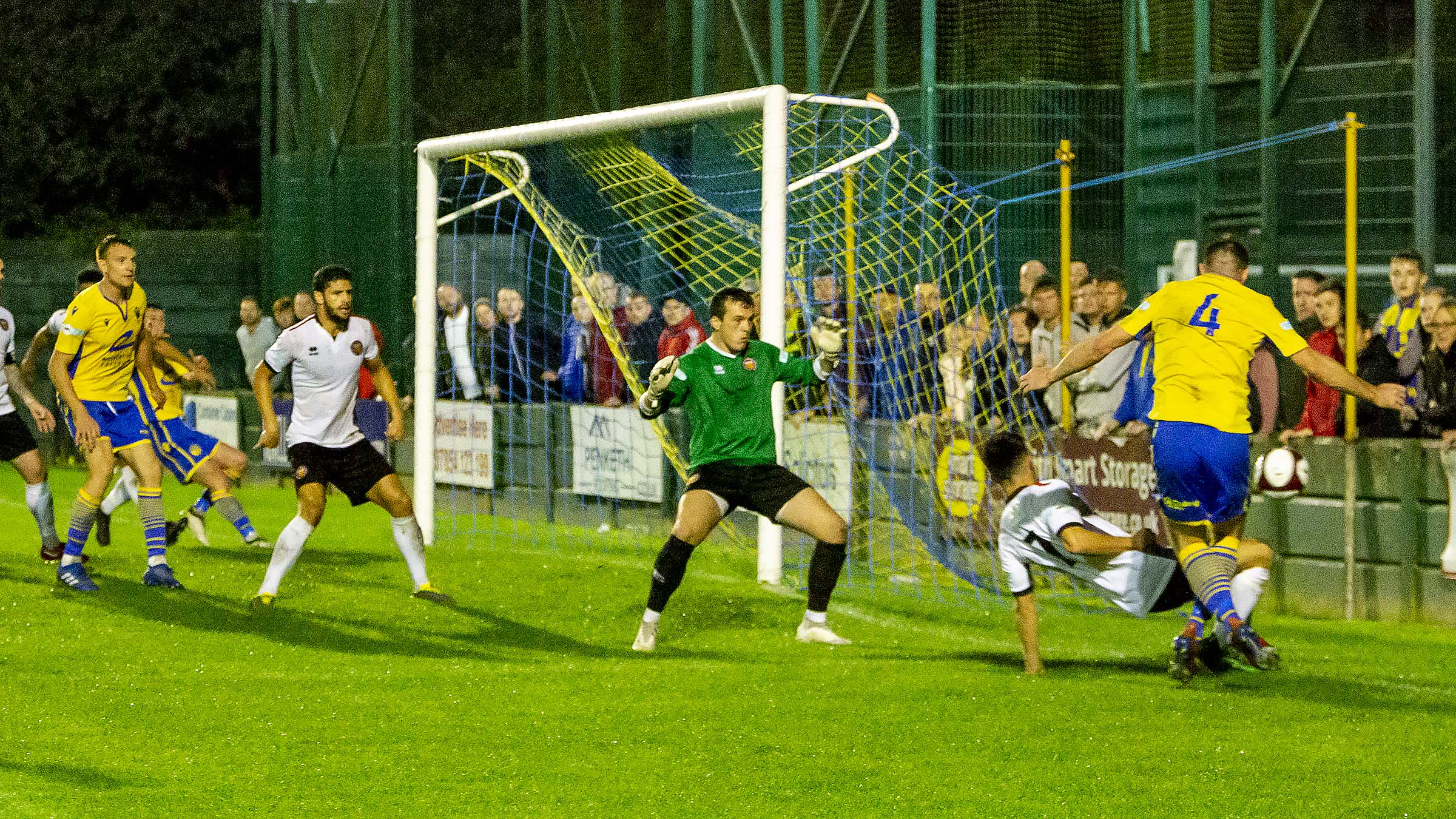