Manager Paul Carden sits down and discusses his time so far with Warrington Town and the goals for the rest of the season.

The aim coming in was always to try and get the club to the league above and, as we saw last season, we would have done that but obviously it was a different type of competition. Nothing else has changed in that respect.

We’ve always said that the aim was to get the team producing results which we have. Someone told me that we have achieved a 51% win record since I joined, which is really good and something we’re proud of.

We’ve done well in cups against higher opponents and I think a big thing for the club as well we have assets in the team. The likes of Ben Garrity, Dylan Vassallo, Jack Dunn and Tom Warren, they’re young players who are assets to the club and that’s what we’re striving for. A combination of good results, good play and good players.

It’s important you have guidance towards the youngster players, too. There’s plenty of good examples in the squad such as David Raven, Steven Jennings, Tony Gray and Mark Roberts. The examples that the young players have got is priceless. They’re obviously seeing that doing the right things at a young age, these players are going on and playing in the 30s because they’ve looked after themselves and not just that they’ve done more than capable performance at this level which are up with the best. It’s invaluable that these experienced lads give, as they really help bring the players up.

There have been plenty of highlights I think so far. South Shields away is probably my best memory in the final. We weren’t fancied, even though we had already beat them twice and we had a couple of knocks going into the game but we did what we were doing and getting results and we knew how to play and the feeling at the end was unbelievable. 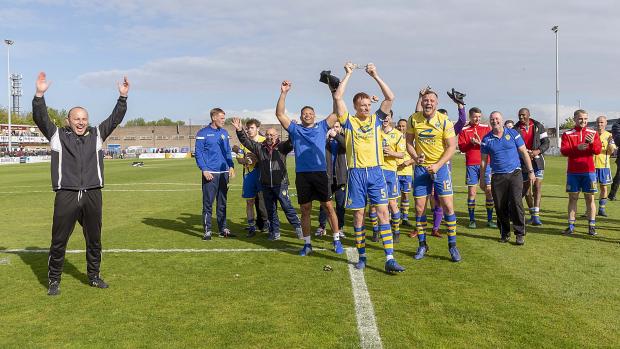 The stand-out performance over my time was probably Nantwich in the semi-final, it was an unbelievable performance in the second half. There has been a lot of highs in my time at the club and hopefully there’s more to come.

The fans have been great towards me since day one coming in. They’ve been great and it’s growing. The crowds are growing, we’re getting more through the door and we’ve got to keep trying.

I know the fans are pushing people to come though as well. We’ve seen at times, like some of the games we’ve had in the play-offs, that we can draw big crowds and we need to keep pushing that.

But the fans who come through thick and thin and in all weathers have been unbelievable. We hear them wherever we are. Even if there’s just a minibus full of them, we know that they are there, and that’s a real credit to them for being the way the are and their passion and long may that continue and long may they help the passion grow in numbers.

The Yellows next face Hyde United in the Premier Division on Saturday 2 November at Cantilever Park, with tickets available to purchase online.