This evening, Warrington Town make the short trip to Greater Manchester to take on Atherton Collieries at the Skuna Stadium. Here’s everything you need to know ahead of the match.

Paul Carden could hand Louis Barnes his league debut after the left-back missed the season opener against Morpeth through suspension.

Dylan Vassallo went for an x-ray after going off injured at the weekend, while Jack Dunn is hoping to shake off a calf niggle.

The only long term absentee is Bohan Dixon, who is working his way back to full fitness after undergoing foot surgery this summer.

Despite going seven games unbeaten in pre-season, Town suffered defeat against newly-promoted Morpeth at the Winner Recruitment Stadium on

Sean Reid, Jack Foalle and Ben Harmison all scored for The Highwaymen, and although the Yellows created numerous opportunities in the second half, they only had a solitary Mark Roberts header to show for their efforts.

Meanwhile, Colls – playing at their highest ever level of football after a rapid rise through the football pyramid – secured a 2-2 draw away at fellow newcomers Ashton United thanks to goals from Brad Lynch and Oliver Roberts. 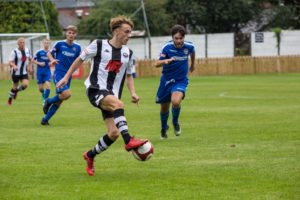 A tricky right winger, Hardcastle was named Division One West’s Player of the Season after a stellar campaign for Colls.

He arrived at the club in 2014 having played under manager Michael Clegg at Atherton Laburnum Rovers and Pennington FC, and has gone on to make over 250 appearances for the club.

Meanwhile, Bentham will be looking to get his name on the scoresheet having proved his goal-scoring credentials further up the footballing pyramid.

The 26-year-old started his career at Maine Road, before earning a move to Nantwich Town. He then moved to Hyde United in the Conference North, scoring 15 goals in 34 appearances.

He wrote himself into the Colls history books last year, scoring six goals in one game against Kendal Town.

Tickets for tonight’s game are priced at £8 for adults, £5 for concessions, £3 for juniors and free for under 12s go free. Fans with a ticket for tonight’s postponed League 1 game between Bolton and Doncaster can also attend free of charge.