WARRINGTON Town recorded a third successive pre-season win as they beat Liverpool side Lower Breck 2-1 in the shadows of Anfield on Monday night.

After a goalless first half, the introduction of Jack Mackreth sparked the Yellows to life and he helped set up a goal for Craig Carney eight minutes after the restart and then added a goal of his own midway through the second half which proved enough.

Jordan Buckley missed a late penalty amidst a slightly disappointing end, that saw Lower Breck pull a goal back after a defensive lapse, while the Yellows were perhaps fortunate not to concede a spotkick of their own in the dying stages against the North West Counties side, who showed up well.

Blackpool midfielder Ben Garrity, who the Yellows signed from Lower Breck, was in attendance to watch both of his former clubs in action, although there wasn’t much action in the opening quarter of an hour.

The Yellows eventually started to see the ball stick in the final third, and Carney rattled the cross bar on 17 minutes with a first-time effort after the hosts had failed to deal with a cross from the left.

On the left flank was Trialist E, a direct running and pacey winger who impressed before his withdrawal mid way through the second half, and he became a constant threat to the Lower Breck defence.

The five starting trialists included a goalkeeper making his first outing of the season, while Trialist B was the midfielder who was arguably man of the match in the eye-catching victory over Tranmere Rovers on Saturday.

Trialist E set up a chance for Josh Amis and then played a nice one-two in to the box with Carney, before seeing his shot blocked.

The trialist goalkeeper caught the eye too with a superb double save on 24 minutes, taking the sting out of the first shot and then scrambling back to deny the Breck forward on the line.

A more familiar name in Mark Roberts probably stopped the Yellows taking the lead on the half hour, heading over the bar from a corner at the back post when defensive partner Matt Regan was better placed, and Regan would later spend several minutes off the pitch to get treatment for a head knock that saw him play the whole second half bandaged up.

Breck kept asking questions of the Yellows defence and on the stroke of half time, fired a warning shot just wide.

A trio of changes at half time triggered a much more lively and fluid second half performance, and Mackreth almost laid on a goal for Amis within 60 seconds of the restart, the big man just unable to get over a header.

Mitch Duggan then fed Mackreth in to the box, his shot whistling wide of the far post, and then Carney ghosted in to head over from a Duggan cross.

The first goal had very much been coming when Amis flicked on Mackreth’s ball forward and Carney got on the right shoulder of the defender and steadied himself to fire across the ‘keeper. 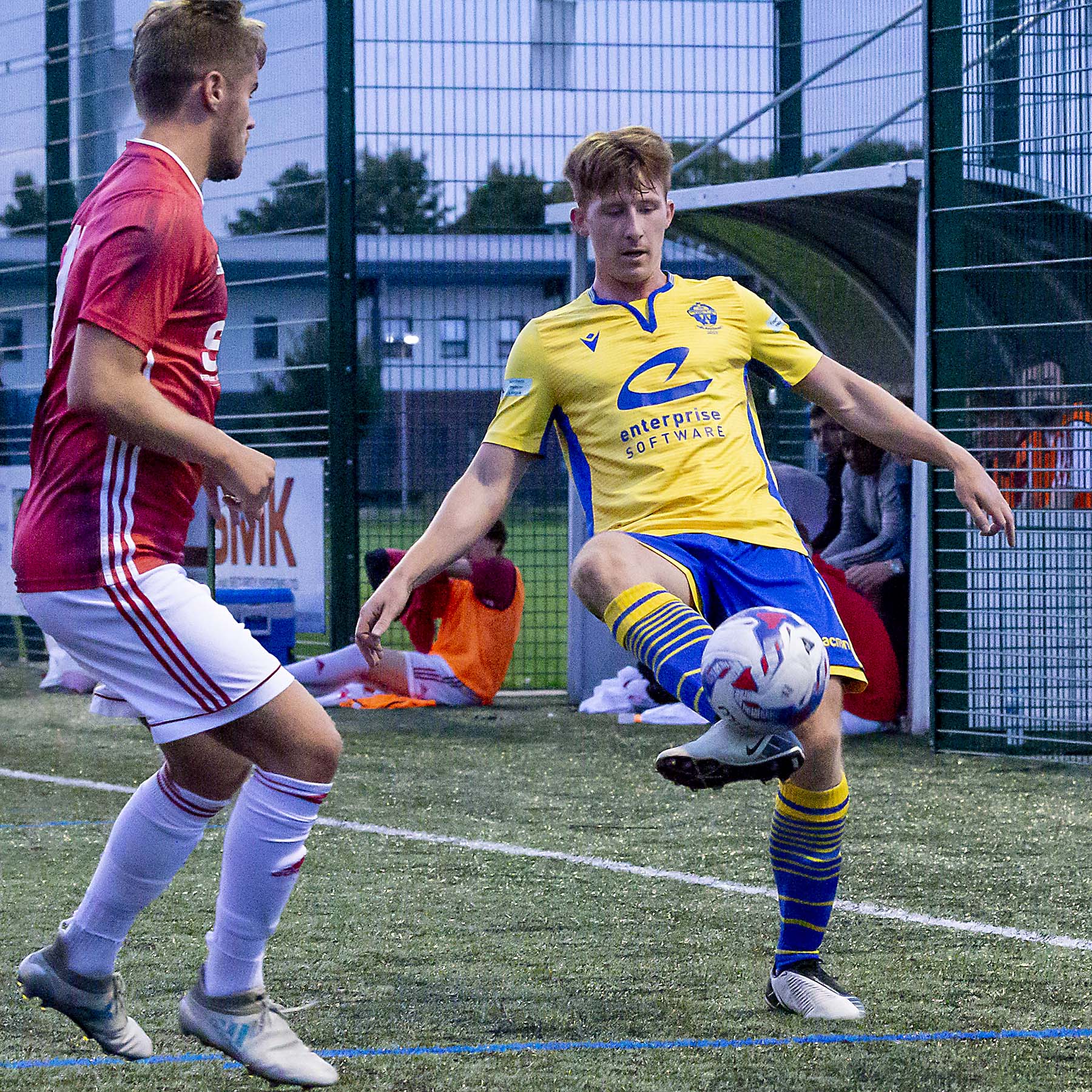 Amis and substitute Bohan Dixon hit rising shots over the bar, and the Yellows were comfortable – with Trialist A in goal barely seeing any action in the second half.

Mackreth got a goal for his efforts 15 minutes from time, winning a free-kick and then going unmarked from it, Carney squaring the ball across to him and Mackreth’s first time shot, though not the cleanest hit, made its way through the bodies in the box and in to the bottom corner.

The Yellows tried for a third goal and after a scramble in the box where neither Regan or Callum Grogan could do enough to make a meaningful strike goalwards, a long ball up field caught out Trialist A and Joel Amado, enabling Breck’s Louis Austin to nip in and score in the empty net with three minutes to play.

The two goal advantage could have been restored barely a minute later when Buckley won a penalty, but his subsequent spot kick was saved by the ‘keeper – while at the other end, with virtually the last plays of the game, Breck had two vocal shouts for a handball against Regan turned down by the referee, much to the frustration of the home bench.

Warrington Town are next in action on Friday at home to City of Liverpool, when fans are allowed back at Cantilever Park for the first time since lockdown.

Pre-purchase your tickets ahead of Friday by clicking HERE