With the game seemingly heading for a draw, Cusani came off the bench and curled beyond the outstretched Adam McHugh to earn Town a vital three points in their bid to keep pace with the top two.

Whitby did have chances of their own in a hotly-contested matchup, but Bradley Fewster blasted their best chance over from close-range midway into the second half as the Yellows secured their second win in the space of four days.

Paul Carden opted to name the same started 11 that claimed victory over Matlock Town last time around, although Josh Amis did return to the bench in place of Alex Whittle.

The visitors came into the game off the back of three consecutive away wins and looked to start the brighter of the two sides. It took just four minutes for their first shot of the game, but captain Dale Hopson fired wildly over the top from distance.

Nevertheless, Warrington did start to dictate possession and forced a half-chance just three minutes later. Seasiders goalkeeper McHugh – in for Jack Norton – unconvincingly punched as far as Ben Garrity on the edge of the area, but the Yellows midfielder could only drill a shot wide of goal.

The contest remained evenly balanced as the half wore on, with both sides trying to assert their style of play on proceedings. Shortly after Matthew Tymon saw a snapshot in the area well blocked, Warrington broke well through Jack Dunn, who superbly dribbled past two defenders but could only drag a right-footed shot narrowly wide.

Despite Town’s monopoly on possession, it was Whitby who created the first real major chance of the game on 28 minutes. After some delightful interplay around the area, it fell to Bradley Fewster who slipped at the vital moment as he prepared to let fly from inside the area.

Chris Hardy’s side continued to threaten when they had the opportunity, and Tony McMillan was forced into a low save on the half-hour mark as Daniel Rowe’s flick-on from a corner was allowed to squirm towards goal.

The hosts continued to push forward as the half-time approached, but the closest they came before the interval was a Robbie Evans strike which flew just wide of the left-hand post.

Warrington started the second period in an extremely positive manner and struck the woodwork twice in as many minutes. First, Evans saw a drilled effort from the edge of the area strike the base of the post, before Jack Mackreth’s deflected cross bounced off the top of the bar.

Despite this, Whitby continued to look threatening on the break and both sides fashioned chances in the space of 60 seconds. Shortly after Fewster fired over when well-placed inside the area, Tony Gray saw a header flash just wide of McHugh’s right-hand post after being picked out by a pinpoint Dunn cross.

The introduction of Josh Amis and Marcus Cusani midway into the half sparked some extra life into the Yellows, and the former did well to win a free-kick that caused the visitors some trouble. Dunn’s deep floated cross was allowed to fall to Gray at the back post, but his half-volley was pushed aside by McHugh.

Shortly after, Cusani more than made his presence known to give Town a deserved lead with 10 minutes remaining. The substitute was given far too much time to cut the ball back onto his left foot before curling a delightful shot into the far corner.

With the wind in his sails, Cusani tried to add a second minutes later after latching onto fellow interchange Connor McCarthy’s lay-off. After driving into the area, the winger checked back onto his right foot only to see another bending strike deflect agonisingly over the top.

Connor McCarthy had a chance to double the lead in stoppage time after being freed by a team-mate, but he was caught in two minds and saw his shot blocked by Leon Scott.

Nevertheless, it mattered little as Warrington held on to pick up maximum points for the second successive game. 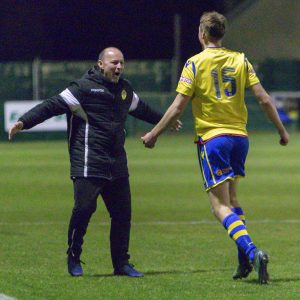