WARRINGTON Town returned to winning ways with a 2-1 victory over Radcliffe at Cantilever Park.

They had to survive a second half onslaught from the visitors though, who peppered the Yellows goal after the break with goalkeeper Charlie Albinson called in to action on several occasions, either side of Jean-Louis Akpa Akpro’s strike.

In the end, the two goal advantage built up in the first half was enough for the hosts, earned through a Bohan Dixon penalty following a handball, and Luke Duffy’s fine goal five minutes before half-time.

It was an important win for the Yellows, who would have been disappointed with not only the result but their performance in the 3-2 reverse at Mickleover last week, their first defeat of the season.

The line-up was shuffled, the suspended Scott Brown sent off in that defeat, starting his suspension meaning Michael Rose returned to his more familiar role in the centre of midfield, with recent signing Matthew Taylor taking the left-back berth. Mitch Duggan also made his first start of the season in place of James Baillie at right-back.

TEAM NEWS | Here are the line ups for both sides. pic.twitter.com/etBAWnksJz

Josh Amis forcing a corner in the very first minute set the tone for what was an open game throughout, and the Yellows went close on seven minutes when Cameron Belford denied Jack Mackreth.

After a succession of corners, the early Yellows pressure told when Mark Roberts’ header across goal from a corner was handled by a defender for a penalty, and Dixon stepped up to send Belford the wrong way for 1-0. 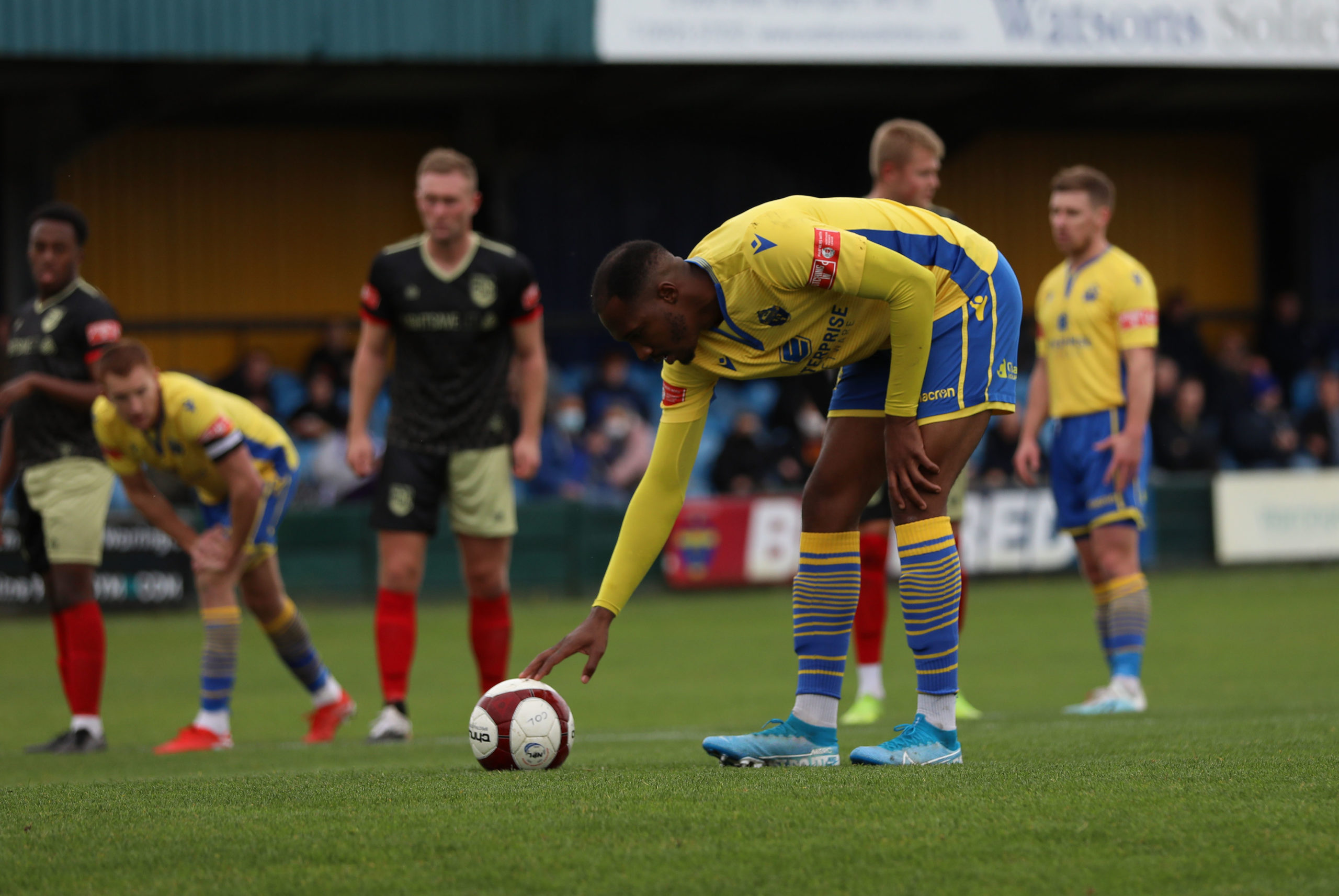 The game went in to a lull in the middle period of the first half, and was only woken up again by two unsavoury incidents that saw Belford unpunished for appearing to lash out at Mackreth, and then Radcliffe ‘skipper Matthew Crothers was booked for a diving tackle on Taylor.

Amis had the ball in the net on 38 minutes, though only after being penalised for a push, but the Yellows didn’t have to wait much longer for a second.

Dixon went on a rangy run through midfield and released Amis, with Belford rushing out to beat him to the ball at the edge of the box, only clearing the ball as far as Duffy.

Duffy, who had earlier tried a speculative effort in not too dissimilar circumstances but from 20 yards further back, this time measured his shot perfectly, as it dipped just under the crossbar and above the retreating defenders with Belford stranded.

GOAL! 40 | Brilliant! Dixon with a fine run, releases Amis and after Belford is out to deny the striker, the ball falls to Duffy, 35 yards out, and he measures his shot to perfection under the crossbar. 2-0. pic.twitter.com/xrMi83w3Yu

Two was very nearly three a minute later when some lovely football down the right opened Radcliffe up, Mackreth finishing nicely from a tight angle only to be denied by the linesman’s offside flag.

Albinson had been untroubled in the first half, and it remained that way until half time – but only thanks to a superb Roberts block on Akpa-Akpro’s shot and then Andrew Owens’ glancing a header wide from a free-kick.

Radcliffe made two substitutions around half time and they came out a different team, laying siege to the Yellows goal.

It took two minutes for Albinson to be forced in to his first save, adjusting his body well to deny Akpa-Akpro’s deflected effort, and then he parried away a Larnell Cole shot from the left. 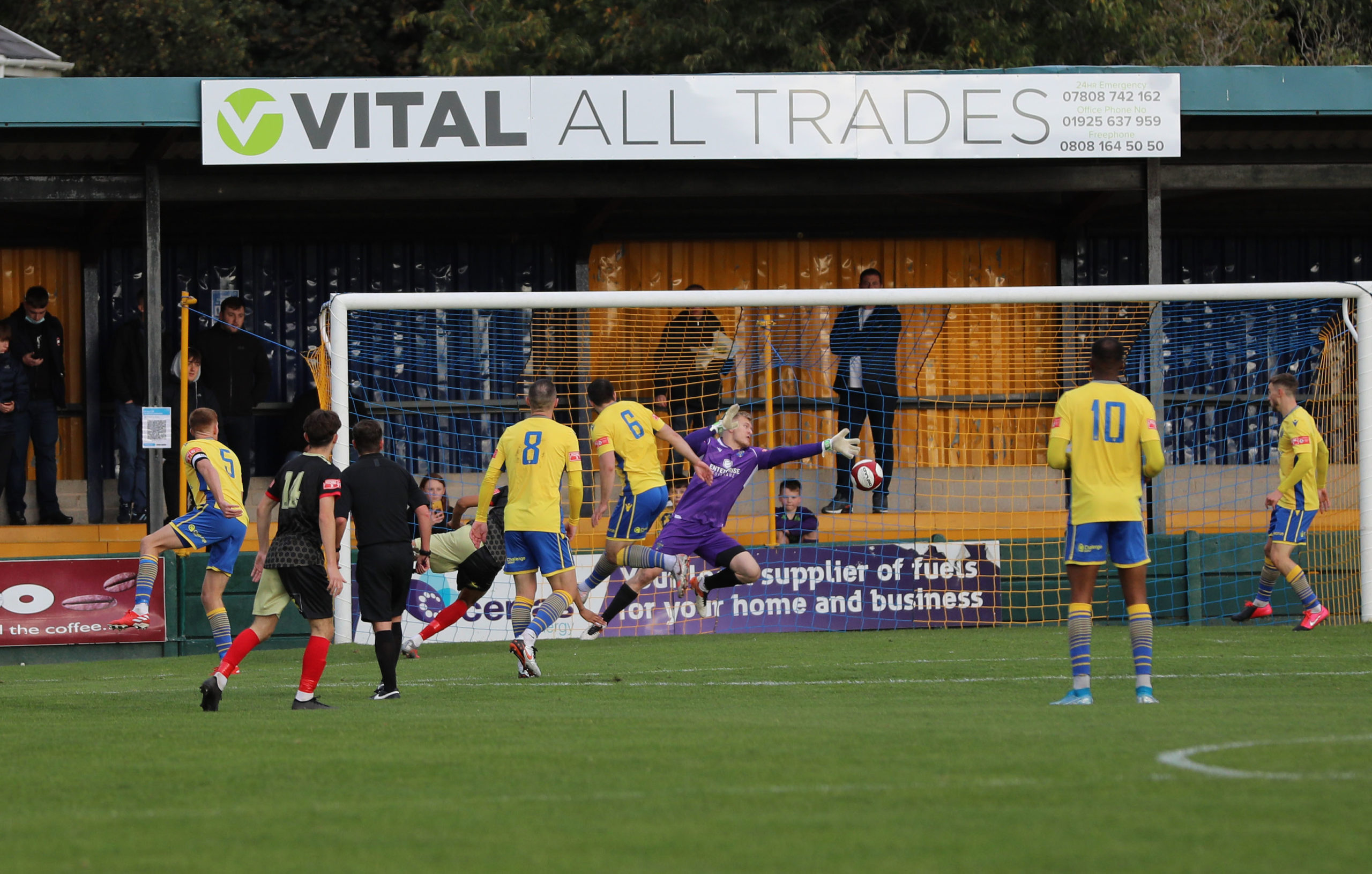 For the first 15 minutes of the second half, it was almost Radcliffe against Albinson as the ‘keeper also denied Kole Hall’s header, pushed behind a fizzing shot from Simon Lenighan and then watched Luca Navarro’s nicely guided shot come back off the post.

Although their own goal was leading a charmed life, the Yellows could have wrapped up the points on the hour mark, as Amis just couldn’t get enough of a contact on Dixon’s ball to beat Belford, the ‘keeper just doing enough to snuff out the danger with his feet, and then he was well placed to catch a Duffy shot minutes later.

The visitors finally got their goal on 66 minutes, a whipped cross from the right by Jonathan Royle was steered home by Akpa-Akpro to make it 2-1 and it was very much game on.

Navarro, who was introduced seconds before the half-time whistle, was lively for Radcliffe and their play was being dictated by former Yellows midfielder Lenighan.

The Yellows were dropping deeper and deeper, though they weren’t conceding as many openings, with Radcliffe restricted to a number of corners as time ticked on.

Thomas Miller had the most glorious of chances, heading over the bar from barely yards out after a corner had slipped through the grasp of Albinson, while at the other end, Jordan Buckley was denied by the legs of Belford.

A third goal wasn’t needed in the end, as Radcliffe’s pressure was in vain – Warrington maintaining their spot at the top of the Northern Premier League table with a 2-1 win.

The Yellows return to Cantilever Park on Tuesday (October 20) to face Nantwich Town. Tickets are available to purchase online.