Warrington boss Paul Carden admits that his side were waiting for the perfect attacking situation to develop as they were held to a 1-1 draw away at Stafford Rangers.

Despite falling behind to Andrai Jones’ first-half strike, the Yellows bounced back well and equalised through Jack Dunn on his return from a hamstring injury.

Following the game, he admitted that his side weren’t their usual selves at the top end of the pitch, but insisted that they still did enough to pick up all three points at Marston Road.

“I was disappointed to not come in at least level at half-time,” he said. “It’s a mistake from Tony [McMillan] for their goal, but I felt that we were in control of the first half for large parts.

“We lacked a little bit of desire to get on the end of things and we were waiting for that perfect pass, which was never going to happen on that pitch.

“We were on our heels instead of getting across. I said to Jack Dunn, ‘you’ve scored goals at the back post all season,’ and to be fair to him, he got in the right place in the second half for the equaliser.

“I thought, in the second half, we were the better team and deserved to win the game. We pride ourselves on being tight and mean and not giving cheap and sloppy goals, which is why we have the best defensive record in the league.

“People make mistakes in the top flight, so they’re going to happen here. Keepers misjudge crosses or come for things that they can’t get to. Tony’s made big saves for us… it was more the other end that disappointed me today.” 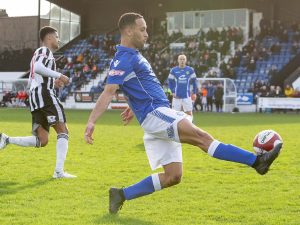 One major positive for Warrington was the performance of Russell Benjamin, who came in for his first league start of the season in place of the suspended Ben Garrity.

The midfielder orchestrated the game from the middle of the park and nearly capped his display off with a goal, had Adam Siviter not palmed away his volleyed effort from the edge of the area.

Despite that, Carden expressed his delight at Benjamin’s performance, insisting that he took his chance with real conviction.

“I thought he was tremendous,” Carden said. “He grew into the game and found his feat. That was his first start since Prescot Cables, and he was outstanding. With everything about him today, he oozed exactly what I know he’s got.”

“I’ve said to the lads in there, don’t be down or beaten. That could prove to be a big point and we’ve just got to move forward now.”