Warrington Town had to settle for a point against 10-man South Shields in a repeat of last season’s play-off final.

The hosts played more than a half with a numerical disadvantage after Nathan Lowe was sent off for a stamp on Mitch Duggan, but the Yellows couldn’t find a way to snatch a winner.

Robert Briggs had earlier cancelled out a scrappy Ben Garrity opener, and perhaps both sides would have left Mariners Park happy with a point.

Returning to the scene of one of the club’s finest hours, the play-off final win in May which would normally have resulted in promotion, the Yellows handed a full debut to Tyrone Duffus in place of Steve Jennings, who dropped to the bench through illness.

They made a lively start, with the in-form Jack Mackreth finding some early room on the right flank. He would be the main outlet throughout the match, and it was from his cross on 14 minutes that the ball was cleared to the excellent Mitch Duggan to fizz a shot at the ‘keeper for the first shot on target.

The opening goal came off the back of a phase of play where Tony Gray had been brought down on the edge of the box as he tried to weave through, Louis Barnes’ well-hit free-kick tipped over the bar by Myles Boney. From the resulting corner, there was a scramble in the goalmouth and Garrity managed to get it over the line for 1-0.

The lead lasted seven minutes, Shields finally making their domination of possession count when Robert Briggs shot first time from the edge and though he didn’t catch it cleanly, it found the top corner.

But the Yellows were happy to contain the hosts and continued to create the more major openings, hitting the bar on the half hour when Gray flicked Mackreth’s cross at the front post.

At the other end, an awkward shot by Lowe bounced up in front of Tony McMillan who pushed wide, before the game’s big turning point close to half time. A Yellows corner was cleared and Duggan and Lowe went in tough in the centre circle, the referee giving Lowe a red card for an apparent stamp on the Shields striker, much to the angst of the home crowd, incensed by what they felt was the wrong decision.

The hosts held on until half time and regrouped, but the Yellows started the second half brightly, Mackreth scuffing a golden opportunity before the best chance on the hour, when Duggan’s through ball was laid off by Garrity for Gray to slide agonisingly wide of the post with the ‘keeper beaten.

Even with a man less, the hosts were threatening and their substitutes livened up the final quarter as they pressed for a winner.

One of the Yellows substitutes, Jack Dunn, was denied twice – first by a last ditch Jordan Hunter clearance, and then by a sharp Boney save at his near post from a short corner.

The hosts’ best chance fell to Jason Gilchrist, cutting inside on to his favoured right foot to force a good stop from McMillan, before Duffus was in the right place to deny Dillon Morse at the back post.

As time wore on, a draw looked the more likely, and though the Yellows had a couple of openings in injury time, they couldn’t force a clear cut chance and had to settle for a point.

They are next in action at home to Basford United on Saturday. 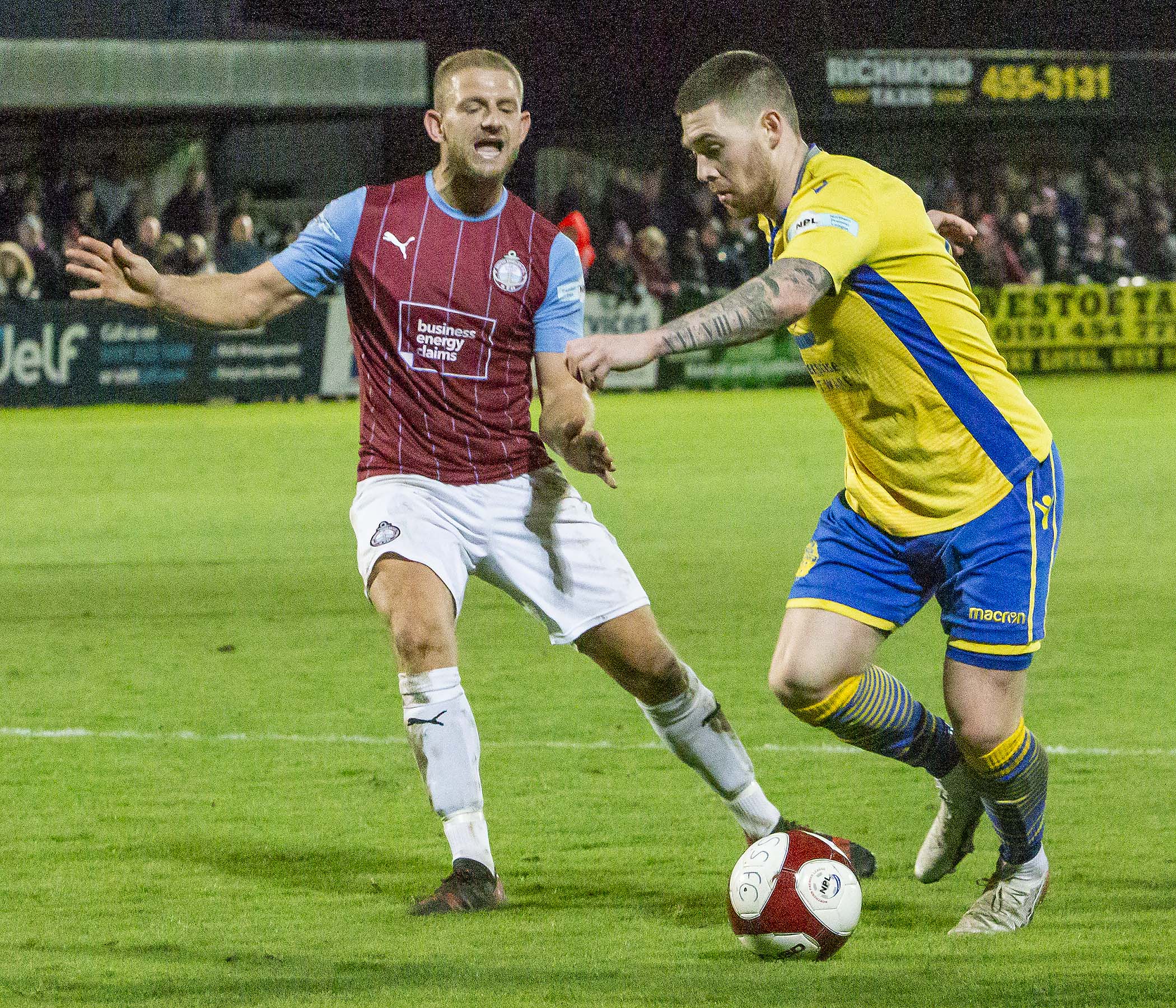 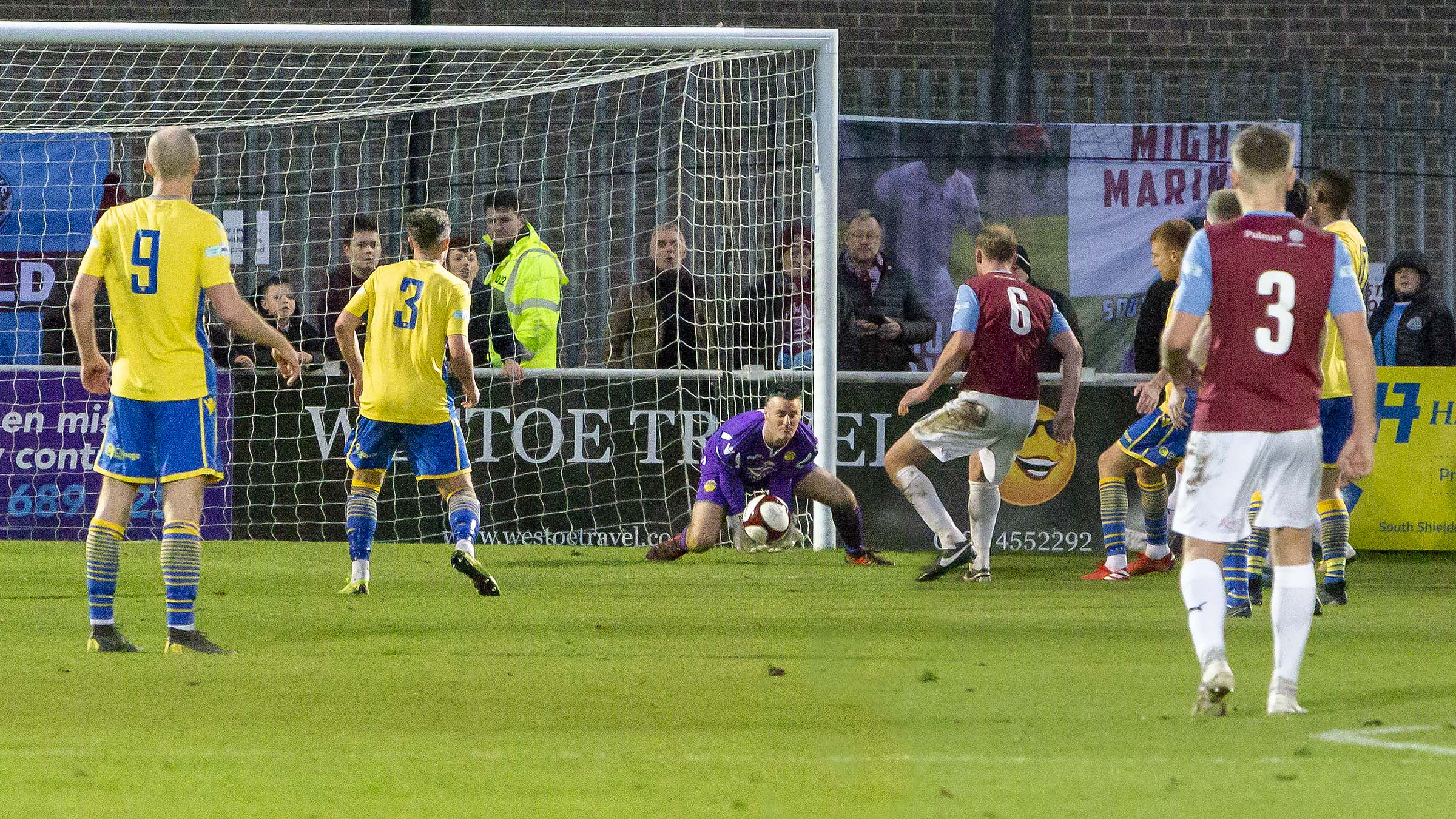