Did you know that there are five Premier League clubs within a 45-mile radius of Warrington Town’s Cantilever Park ground? That is a quarter of the entire top division of English football within an hour’s drive of The Yellows. Let’s take a look at those Premier League teams on Warrington’s doorstep.

We start with the reigning champions of England. Warrington is just 20 miles up the river Mersey from Liverpool’s famous Kop. German manager Jurgen Klopp recently ended 30 years of hurt and brought the Reds a first-ever Premier League title to Anfield.

Graced by some of the true greats of the beautiful game, think Fernando Torres, Graeme Souness, Ian Rush, Kevin Keegan, Alan Hansen, Steven Gerrard and Kenny Dalglish, the Liverpool stadium has a capacity of about 54,000. That is more than 21 times the size of Cantilever Park.

Across Stanley Park from Liverpool is Everton’s grand old ground. From the Gwladys Street End, Toffees fans cheer on a team coached by Italian master Carlo Ancelotti. By the far the most high-profile managerial appointment in the club’s history, Goodison Park holds capacity of about 39,500.

Far larger at 15-and-a-half times the size of Warrington’s ground and roughly the same distance away from it as Anfield, the last heyday for Everton was in the 1980s. Their 1995 FA Cup win was the last time they brought a trophy back to the blue half of Merseyside. 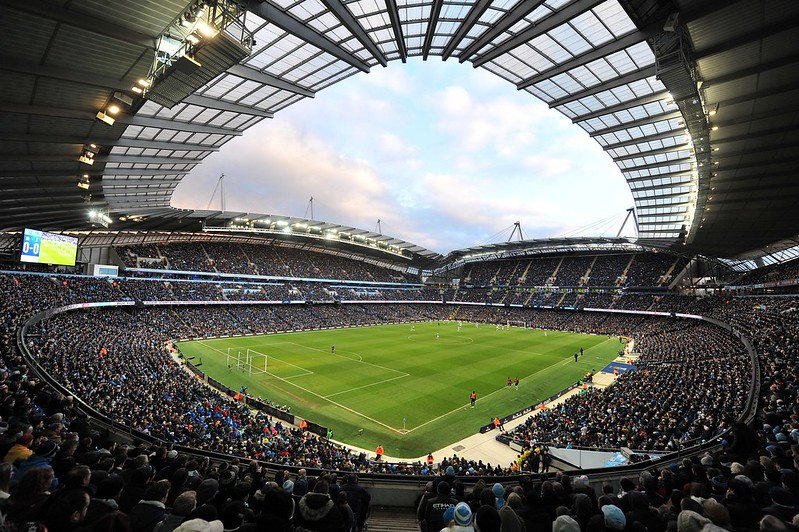 Head 21 miles northeast along the M62, and you’ll come to Manchester City. Since leaving Maine Road, their new stadium as been known by many names: Eastlands, the City of Manchester and now Etihad Stadium. Sponsoring a football ground is nothing new, and City’s capacity is around 55,000.

Deposed emphatically by Liverpool as Premier League champions, Pep Guardiola could still guide the Sky Blues to another treble of cups. The EFL Cup is already in the bag and,  according to the latest football betting odds, Man City are 3/5 favourites for another FA Cup and 3/1 to finally win the Champions League.

By far the biggest Premier League ground close to Warrington is Old Trafford about 16 miles up the A57. About 75,000 football fans can watch the beautiful game in “the Theatre of Dreams” where Bobby Charlton, Denis Law, Ryan Giggs, Paul Scholes, Cristiano Ronaldo and Wayne Rooney once played in front of the famous Stretford End.

The Manchester United of today appear to have turned a corner, with the catalyst for change in the post-Alex Ferguson era being the winter window purchase of Portugal midfielder Bruno Fernandes. Will the Red Devils bring the glory days back to United? Only time will tell.

And finally, Burnley’s Turf Moor ground is 43 miles north up the M66 from Warrington Town. The Clarets can welcome almost 22,000 supporters into the stadium where Premier League football has been on offer in five of the last six seasons.

Burnley aren’t big spenders, so Sean Dyche has done a fine job to twice take them into the top flight and keep them there. Underdog stories like the Clarets give fans of The Wire the right to dream of promotion from the seventh tier of English football one day.