Warrington Town have slipped to third in the EVO-STIK Northern Premier League table after North Ferriby United were liquidated and had their playing records expunged.

Paul Carden’s men had enjoyed handsome victories over the Villagers, winning 5-0 and 4-0, meaning they have had six points and nine goals wiped off their points difference.

Title rivals Farsley Celtic fared even worse, losing six points and 10 goal difference, but South Shields gained massively from the situation as they had lost to North Ferriby earlier in the season, one of only two victories they had mustered.

That means that South Shields leapfrog Warrington in to second place, and perhaps even more significantly, now boast a superior goal difference to both the Yellows and Farsley.

Here’s how the table now stands: 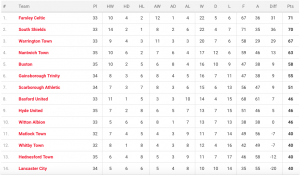 It couldn’t have come at a worse time for morale for the Yellows, who have fell off the pace in recent weeks after failing twice to beat lowly Stafford Rangers.

In their last outing, they were held to a 1-1 draw, just a fortnight after being beaten 3-2 at Cantilever Park by the same opponents.

Fans will be anxious a repeat of last season, where the Yellows got within a point of league leaders Altrincham but then only managed two wins in their last 11 games, isn’t on the cards especially with the toughest play-off format ever to navigate if they are unable to earn promotion as champions.

Warrington have seven games to go, starting with Saturday’s visit of Gainsborough Trinity.

The champions gain automatic promotion to the National League North. The next four teams will compete in the play-offs, with the second and third placed teams earning home advantage against the teams placed fifth and fourth respectively.

The two winners of those games then meet in the play-off final at the home of whoever was ranked higher in the league.

Once that’s out of the way, the play-off winners then have to play a so-called super play-off against the winners of the Southern League Central play-offs, which is one of three other leagues at the same level of the football pyramid as the Northern Premier League.

It has recently been revealed that this will be the only season that the super play-off will be in place, as the FA continue their re-structuring of the football pyramid.

Warrington lost at the first hurdle of the play-offs last season, going down 3-0 at home to Grantham Town, while they also lost in the semi-finals in their previous play-off experience, when in NPL Division One North.