Warrington Town recorded one of the results of the season as they won their top of the table clash at South Shields, and with it ended the hosts long unbeaten home run.

Two goals inside five first half minutes from Josh Amis and Jack Dunn gave the Yellows an advantage that they managed to cling on to, amidst a South Shields onslaught in the second half.

Nathan Lowe pulled one back for the hosts before the break, but having won 20 and drawn one of their last 21 home league games, they were beaten.

The result keeps Warrington second in the table, only below Farsley Celtic on goals scored, and now five points ahead of today’s opponents.

Shields would have felt that they owed Warrington one having lost the reverse fixture 3-0 earlier in the season, and they started brightly, David Foley’s low shot bobbling wide of the far post following a touch off a defender.

The hosts would enjoy the majority of possession, though in the opening exchanges their passes were largely sideways or inside their own half, and apart from two early shots from outside the box, Tony McMillan wasn’t tested.

That was until the 25th minute when a low ball in to the goalmouth resulted in a scramble on the line and somehow the Yellows kept it out.

And they made it a double sucker punch as barely a minute later, they broke the deadlock with their first real chance.

Mitch Duggan took a free kick down the line to Bohan Dixon, with everybody waiting in the box for a cross, Dixon turned nicely and curled one in with his left foot that skimmed off Tony Gray and Amis ran in behind to shoot past the keeper for his ninth goal in seven games.

Five minutes later the majority of the 1,996 crowd at Mariners Park were stunned in to silence, as Dunn took the ball on and lashed a stunning left-foot strike in to the top corner for 2-0.

Shields continued to play as they had done for the opening half hour, substitute Phil Turnbull linking up play for Robert Briggs to shoot just wide of McMillan’s left-hand post.

The hosts wouldn’t have to wait long to get a goal back, Foley’s shot blocked by Duggan and fired out to the edge of the box where Shaun Beeley couldn’t get it under control, and much to his frustration, Lowe was well placed to drill home.

By half time, Warrington were clinging on, with McMillan having to save well with his legs from Craig Baxter.

The Yellows regrouped at the break and saw off the first 15 minutes of the second half with relative ease, even going close themselves twice from corners.

As time wore on, Shields’ pressure increased, though they were restricted to long range efforts from both Foley and Luke Daly, both dealt with by McMillan.

Counter attacks were the best the Yellows could hope for if they wanted a third, Dunn twice shooting wide, but in reality the focus was on defence.

With five minutes of injury time added on, Shields threw everything at the Yellows but they stood firm in dramatic fashion, for what was a defensive effort reminiscent of the famous FA Cup win over Exeter City nearly five years ago.

CLICK HERE for all the action picture by John Hopkins 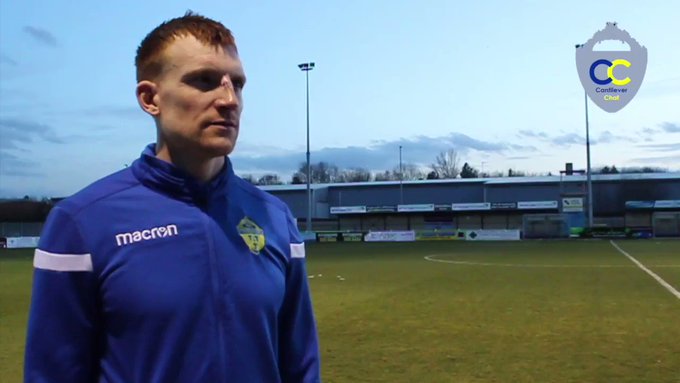 What a performance from the skipper – put his body on the line (quite literally!)