Warrington Town pulled four points clear at the top of the Evo-Stik Northern Premier League with a 4-1 win at Mickleover Sports.

It was a professional display by the Yellows, who scored two goals in either half against the struggling hosts, and stretched their lead at the summit thanks to nearest rivals Farsley Celtic going down away at Lancaster City.

Tony Gray’s volley put the Yellows in front inside four minutes and set the tone for a comfortable afternoon.

His goal was the first incident of note, hitting the ball on the turn from the edge of the box off Bohan Dixon’s flick on, leaving the ‘keeper motionless for a fine opener.

The first half was a turgid affair and at times it felt like both sides would have been happy to call it a day at 1-0.

Mickleover barely got out of their own half in the first 20 minutes, and even when they started to get a foothold in the game, captain Mark Roberts snuffed them out with a couple of interceptions.

As half time approached, the crowd was awoken by a fine second from the Yellows.

Gray played a ball around the corner just inside Mickleover’s half to release a scampering Jack Mackreth down the right, his near post cross was met first time by Dylan Vassallo, who beat the ‘keeper with a sidefooted effort for his third goal in two matches.

Gray could have had his second when a scuffed clearance by Mickleover ‘keeper Lewis King fell to him, though he couldn’t get enough on his first time strike, and Sports went up the other end and pulled one back.

The Yellows failed to clear and Evan Garnett struck a low shot through a number of legs and past an unsighted Tony McMillan in the Yellows goal.

Any impetus that may have given Mickleover lasted all of three minutes, Dixon’s sharp pass in to Gray, saw the striker cut inside and open up past Pablo Mills, who brought him down for a penalty.

Mackreth restored the Yellows’ two goal cushion, burying the penalty high to the keeper’s right for 3-1.

Mickleover didn’t test McMillan, the closest they came was when impressive Czech winger Tomas Junek weaved his way past a few men and into the box, only to be denied by the imperious Roberts.

The Yellows struck a fourth on 69 minutes, Dixon creating time and space for himself in midfield before finding Robbie Evans, who turned sharply on the edge of the box and fired a low drive past the ‘keeper to mark an impressive all round performance.

Substitutes Connor McCarthy and debutant Marcus Cusani had chances late on, but the Yellows had to settle for four, before returning to the changing room to find news that both of their nearest rivals had dropped points, South Shields drawing at home to Buxton.

Warrington are next in action on Saturday at home to Stafford Rangers. 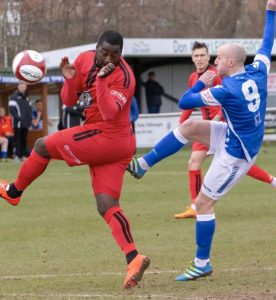