TWO second half goals ensured Warrington Town kept the pressure up on the leaders with a 2-0 win at Matlock Town.

Jack Dunn and Tony Gray fired the Yellows to a hard fought victory which keeps them third in the table, with rivals Farsley Celtic and South Shields both picking up points.

On a lovely day at the picturesque Causeway Lane, Marcus Marshall forced an early corner for the hosts, who have fallen away in the New Year having hinted at a serious play-off push around the time these two last met back in October.

It was 1-0 to the Gladiators that day, and chances were few and far between in the first half of this meeting.

A couple of crosses from the right hand side by right-back Lee Beevers looked dangerous, though the best defence in the league managed to deal with them with relative ease early doors.

The first real sighting of goal came on 12 minutes, Matlock launching a counter attack which saw veteran striker Craig Westcarr flick the ball around the corner for Jonny Margetts in the box, Yellows ‘keeper Tony McMillan was out quickly to narrow the angle and smother the shot, as well as prevent a corner.

Dunn almost nipped in again moments later when Ben Garrity’s awkward ball forward led to hesitation and confusion between Matlock goalkeeper Ross Durrant and Adam Yates, with the latter just about doing enough to prevent Dunn from heading in to the unguarded net.

Both Dunn and fellow wide man Jack Mackreth were trying to get slid in behind the full-back, and they both managed it twice, only for their crosses in to the box to either be cleared or too far.

After Margetts scuffed a half volley wide from the edge of the box, the Yellows had the best chance of the half, Adam Hughes playing a nice ball in to the left channel for Dunn, who laid off Bohan Dixon to shoot over the bar in space.

The visitors had a couple of spells in the half where they’d had their tails up, and they certainly ended the half that way, a teasing corner by Dunn causing problems and from a subsequent free-kick on the edge of the box, Tony Gray hit the ball in to the wall.

Warrington set the tone at the start of the second half and that continued throughout as they claimed the win.

Mackreth proved a constant menace after the break, causing problems for opposite number Brad Beatson, and he had the first chance since the interval when he volleyed over the bar.

He then had a golden opportunity on 59 minutes, slid in to the box by Dixon and cutting on to his left, but he scuffed his shot completely and it trickled through to Durrant.

Dunn hit one wide from the edge before Mackreth again forced Durrant in to action after Gray had caused the ‘keeper to spill an awkward high cross by Hughes.

The deadlock was finally broken on 63 minutes, much to the anger of the home faithful.

They felt that Dixon had fouled Nathan Whitehead going up for a header, and Garrity’s resulting clearance released Dunn, who the hosts thought was offside.

Durrant came rushing out, Dunn knocked the ball around him, managed to keep his balance and then slot the ball in to the empty net.

The crucial second goal came 10 minutes later, the excellent Gray holding the ball up inside his own half and sending Mackreth scampering away down the right. Mackreth got to the by line, exchanged passes with Mitch Duggan and then curled a ball in to the box which Gray brought down and turned in to the far corner.

It was a case of seeing it out from there, and though there was hope when Buxton equalised at home to Farsley, it eventually remained as you were as the top three all claimed three points as the games remaining in the title race reduces to five. 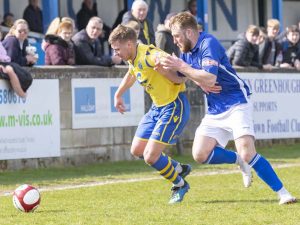 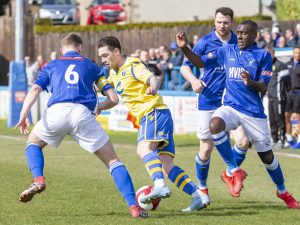 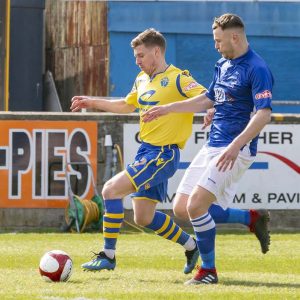